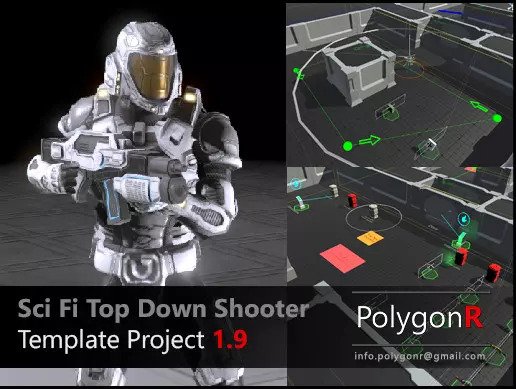 V 1.1 Features:
* Added melee weapons for player and enemies.
* Enemy & player creator tools. Easy to create a player or an enemy using another prefab as a reference.
* Simple aiming weapon IK to point the weapon exactly to the target.
* Always aiming switch. To use it in twin stick shooters where you want to be able to shoot any time.
* Rootmotion and NO rootmotion working better.
* Weapon list now editable in an scriptable object-
* Weapons now can shoot multiple bullets in a perfect arch distribution

V 1.0 Features:
This is a Top Down shooter template project, including a lot of components and assets to start a Top down shooter game in seconds.
It`s been made very simple and accesible so anyone can use it.
The player moves relatively to the camera view, and aims with the mouse or the Right Stick of the joystick.
You can pick up items, activate panels, open or close doors, destroy actors, throw grenades and more…
Weapons are fully twekeable, with parameters like FireRate, Bullet speed, acceleration, divergence damage, and so…
Bullets are managed with a simple pooling system.

AI works using nav meshes and a simple waypoint system, hearing player sounds like shooting or footsteps and using distance and angle of view to control if they chase you, aim you, or attack you.