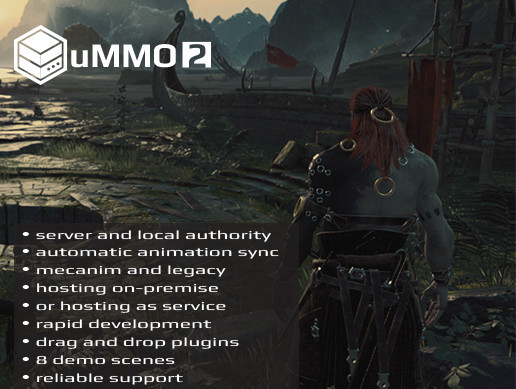 No hard CCU limit! Ever! You can host a local server for testing and later host the actual live server yourself (Linux and Windows supported, no additional software needed at all) or just let us host it! Its your choice completely. Runs in Unity Personal and Pro (and Plus)!

Tip for those of you with experience in UNET: Tired of unstable SyncVars and SyncLists in UNET? uMMO has it’s own, more flexible and more stable way of easily synchronizing variables while still using native UNET. And for those who even remember working with the old (now depricated/obsolete) Unity networking system: Yes, buffered variable sync and one-liner de-/serialization are integrated again. All while taking advantage of the benefits of UNET, and bypassing many of it’s problems.

Made With A Passion For Maintainability
With ONE click change object configuration logic. We believe we took the effort to create a very intuitive comprehensible and reliable developer interface: Easily add movement interpolation to make remote controlled characters appear just like locally controlled ones. Furthermore uMMO features automatic synchronization of animations with ONE click: that means no separate network controllers for animations necessary anymore! Legacy and Mecanim are supported natively! Using drag and drop you easily decide which scripts are being executed on server or clients. Either for the local client who controls your player object or scripts that are applicable for the characters who are controlled by players half-way around the world. This way script separation is being encouraged – even for highly custom and complex MMOs – which greatly benefits maintainability of your project.

Integrate most character controller with absolute ease (authoritative server and local player-authority)
Character/Player controller setups are different. We know that. And we built uMMO around that fact. One example is how easy it is to configure your character for authoritative movement. In many setups you only need to do 2 things:

1. If you have a controller script which looks like this:
public class MyPlayerController: NetworkBehaviour { (or MonoBehaviour for that matter)
change it to this:
public class MyPlayerController: SoftRare.Net.PlayerAction {
2. Change your Input collecting code lines from this:
Input.GetAxis(“Horizontal”); to this: uMMOInput.GetAxis(“Horizontal”);
DONE!

Continue using ANY native UNET feature.
uMMO uses 100% native Unity networking code and does not limit your options.
Example 1: uMMO works with and without “local player authority” setting of the NetworkIdentity component (part of native Unity Networking, aka UNET) and takes it into account.
Example 2: Do you use any other 3rd party asset/own solution which is utilizing UNET? uMMO will integrate seemlessly, and you can make use of any uMMO functionality while working with that other asset.
Example 3: Somethings not working? Search for solutions on the web: All UNET solutions will also work with uMMO.

Works in Unity Personal, Plus and Pro! Works on all Mono-enabled platforms which support UNET. Specifically tested on: standalone Windows/Linux (works with and without headless server), Android.
Because of a bug in Unity does not yet work with IL2CPP, Unity knows the bug and is working on it.